Achievements are earned by reaching certain milestones during gameplay. Some of these milestones include leveling classes, uncovering locations, defeating enemies, and earning gil. 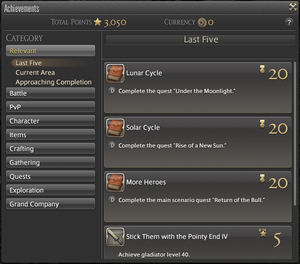 Each time a player earns an achievement, they will gain achievement points. These points can be exchanged for

[Achievement Certificates] by speaking with Jonathas in Old Gridania. Certificates can then be used to purchase special rewards including rare items and gear.

Some achievements grant titles which can be added to a player's display name.