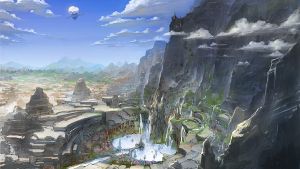 Ala Mhigo is a city-state located on the continent of Aldenard. Once considered the most powerful of the 6 city-states, Ala Mhigo fell to the invading and technologically superior Garlean Empire 15 years ago in a campaign to conquer all of Aldenard. This drove the Hyurans south and west, forcing one of three great Hyuran migrations. But with them, they managed to hold onto their engineering talents. For now, Ala Mhigo remains part of the Garlean Empire. The fall of Ala Mhigo ushered in a change across Eorzea, where the remaining five city-states organized a rough coalition.

An occupied city-state located in a mountainous region of eastern Aldenard. The nation was plunged into chaos twenty years ago when its masses rose up in rebellion against the tyranny of the mad king Theodoric. However, unbeknownst to many, it was none other than the Garlean Empire that had been pulling the strings from the shadows the entire time. They quickly set about moving in to take control of Ala Mhigo as anarchy reigned, and have remained in control of the nation for the past twenty years.

This city was the first to fall in the Empire's invasion and was home to many Highlander Hyurs.[1]