Harnessing the power of blue magic, players can learn to mimic the abilities of wild beasts with this new job. 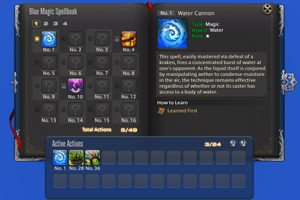 Rather than gaining new actions by increasing in level, Blue Mages learn them from enemies. In order to do so, players must first witness an enemy perform a special attack in battle. Once it is defeated, the player has a chance of acquiring the ability. Job level has no influence on when an action can be learned.

All spells that have been learned are recorded in the Blue Magic Spellbook, found under Character in the main menu. The book details the attack type and aspect of each action. It also contains hints on how to acquire other spells.

Certain blue magic spells can be acquired via Whalaqee Totems. To obtain these items, complete the Blue Mage quest "Blue Leading the Blue" and certain achievements, then speak to Wayward Gaheel Ja in Ul'dah - Steps of Thal (X:12.5 Y:12.9).