The pious Ishgardian clergy guide the flock, and the devout knights protect the weak. Yet even the holiest of men succumb to the darkest of temptations.

None dare to administer justice to these sacrosanct elite residing outside the reach of the law. Who, then, defends the feeble from the transgressions of those meant to guide and protect them?

A valiant few take up arms to defend the downtrodden, and not even the holy priests and knights can escape their judgment. Pariahs in their own land, they are known by many as "dark knights."

These sentinels bear no shields declaring their allegiance. Instead, their greatswords act as beacons to guide the meek through darkness.

When glowing, this symbol indicates the defensive stance Grit is in effect. Grit reduces damage taken while increasing enmity and reducing damage dealt. 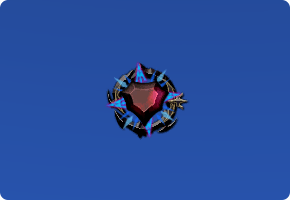 The Blood Gauge displays the amount of Blackblood a dark knight has accumulated. Blackblood is accumulated by several different means, including through the execution of select weaponskills.