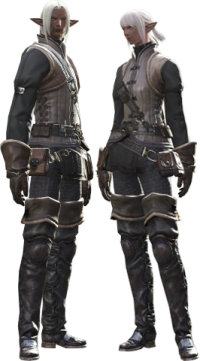 The Elezen are a traditionally nomadic race who in former times claimed sole domination over Eorzea, their presence predating that of other races. Believing this prominence to be ordained by the gods, they came to develop an esteemed sense of honor and pride. The Elezen perceived the immigration of the Hyur as tantamount to invasion, and as a result the two share a past plagued by warfare. At present, however, they can be seen coexisting peacefully, the exception being the reclusive Duskwight Elezen. In The First, they are known as Elves.

In former times, the Elezen were the sole inhabitants of Eorzea, claiming dominion over her. Traditionally a nomadic people, the tall, slender Elezen believed the realm to be theirs by divine right. Unfortunately, this belief made the eventual appearance of the Hyur in their multitudes akin to an invasion, and a long history of conflict ensued.

Ultimately, the Elezen diverged into two clans that exist today. The Wildwood Elezen took to the forests to protect their homeland, while the Duskwight Elezen withdrew to caves and subterrane, opting instead to avoid all contact with any but their own.

Their characteristically tall, slim physiques and elongated limbs are part of a successful adaptation to the land's various environments. Indeed, it is said that their highly sensitive ears can discern the squeak of of a field mouse at a distance of several malms.

For hundreds of years the Wildwood Elezen have lived in the safety of Eorzea's lush forests. They possess an incredibly keen sense of sight: a contributing factor in their unparalleled expertise as Archers. With the formation of Eorzea's governments, however, many Wildwood ventured forth from the forests, drawn to the exhilarating cosmopolitanism of nearby Gridania or the simple nomadism of the plains. There is minimal dimorphism between the two genders, though males are generally considered to be milder and more chivalrous in demeanor. Among their Duskwight brethren, Wildwood Elezen are referred to as Greens, for their love of the forest.

Centuries ago, a number of Elezen sought out a life of peace and seclusion in the depths of Eorzea's caves and caverns. Today, they are called the Duskwight, though to their Wildwood cousins they are known simply as the Greys, after their preference for darkness and stone. They have developed an acute sense of hearing, capable of detecting the faintest of sounds. This natural gift, and the uncanny awareness it grants, has proven advantageous in the field of hand-to-hand combat. The cave-dwelling ways of the Duskwight persist, with some among them turning to robbery and pillaging to survive, earning them the scorn of their woodland relatives. There are few differences between the genders, but Duskwight females are often regarded as being the more passionate and unyielding of the two.

From Dengeki Games, Sept. 2009: They used to rule Eorzea so they have pride that they are the Chosen.