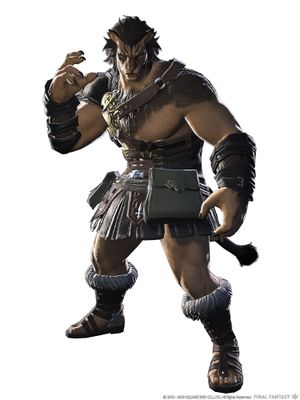 The Hrothgar are a race introduced in Final Fantasy XIV: Shadowbringers. In The First, they are known as Ronso.

Hailing from the distant shores of Ilsabard, the Hrothgar are a burly people of lionlike appearance—or the males are, at least. Females number staggeringly few among their population, and thus are rarely so much as glimpsed by the other races.

The Hrothgar's imposing countenance─mitigated not at all by their sharp claws and still sharper fangs—incited panic amongst Eorzeans upon their arrival. As they were also unable to communicate, initial interactions with the commonfolk often escalated into conflict. It was not until the Hrothgar gained mastery of the common tongue that fears were allayed, and in time they would be as neighbors, welcome in all corners of the realm. 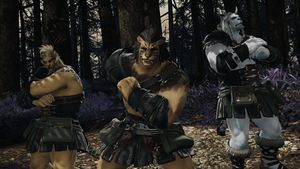 Helions have traditionally been content to reside in southern Ilsabard with their respective tribes, devout servants to their queens, one and all - and thus have they only but recently begun to make their presence felt throughout the remainder of the three continents. Though these Hrothgar initially had no word to describe themselves, scholars came to call them "Helions" after observing how their lives all but revolved about their queen's needs, as planets circle the sun.

Unlike their Helion brethren, the Lost are unbound by the whims of any reigning monarch, having long since found themselves bereft of the warm radiance of their queen. Most find that a nomadic lifestyle best suits their situation, and are known to ply a variety of trades that align with their propensity to travel - seasonal laborer, mercenary, and peddler among them.