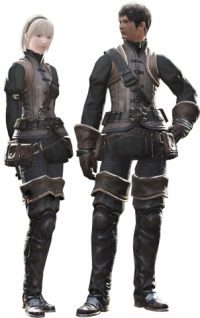 The Hyur are a race with the largest population in Eorzea, coming from neighboring continents and islands in three great migratory waves. With them they brought a sophisticated technology and complex ethos tempered by the breadth of the outside world. In The First, they are known as Humes.

The Hyur are said to have first traveled to Eorzea from her surrounding continents and islands. Three great migratory waves later, they are now the most populous of all the civilized races. They exhibit a relatively modest physique, both in height and build, and are known for their peculiarly short, rounded ears. Hyurs are well suited for traveling long distances by foot, a trait thought to account for their swift proliferation. Their espousal of an eclectic variety of languages and traditions is a legacy of their diverse heritage - as is their resulting lack of a unified cultural identity.

They rapidly became a driving force behind cultural progress, and are now widely attributed with spearheading advances in Eorzean culture. One of the Hyur's strengths is in the staggering variety of languages and social institutions they exhibit. This is said to account for their firm conviction in individual freedoms, though it also results in a relative lack of solidarity and group cohesion.

Two distinct groups now exist among the Hyur - Highlanders, denizens of mountainous areas, and Midlanders, who reside in lower elevations.

The Midlander clan comprises over half of the total population of Eorzea's Hyur. They have established themselves throughout every city in the realm and lead lives as diverse as their heritage. Trained in letters from infancy, the Midlanders are generally more educated than many of the other races and clans. Despite the fact that males tend to be slightly taller than females, there are no significant differences between the genders.

The Highlanders were the first of the Hyur to reach Eorzea. Their name derives from their long tradition of building strongholds in the mountains. Compared to their Midland brethren, the Highlanders are noticeably larger in build. Of late, Highlanders have become an increasingly rare sight in Eorzea, their number represented almost exclusively by those who fled Ala Mhigo after its fall and now work in the desert city-state of Ul'dah as mercenaries and sellswords.

From Dengeki Games, September 2009: They have the closest looks to human and have the biggest population in Eorzea. They have moved to Eorzea over three big immigrations, and their technology and knowledge helped Eorzea a lot to develop its culture. They have little sense of unity and love freedom.